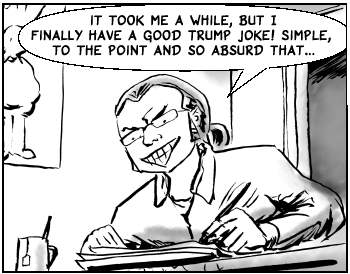 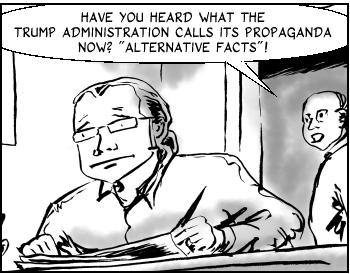 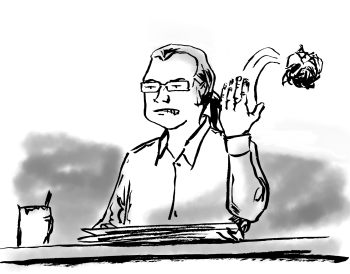 You just can’t out-trump Trump. Or in this case, his thugs, because the latest excercise in Newspeak was coined by Kellyanne Conway.

As you know, I’ve been struggling with this for a while now. This isn’t the first version of this comic, either.

German author Marina Weisband called out the “alternative facts” claim quite brilliantly in a series of tweets. It’s not just some people lying, there’s actually a method behind it, similar to what happened in both Soviet and current Russia:

“If you insist that the sky is green, your aim is not for me to believe it. Your aim is to keep doing it until I say: ‘That’s your opinion. I’ve got mine. Nobody can say objectively what color the sky has.’ That’s how you legitimize obvious falsehoods.
It works because people only have limited capacity to deal with cognitive dissonance, or contradictory information.
Today, one must lie about the size of a crowd so one can later lie about other people’s right to be part of society.”

The whole concept of “alternative facts” and the rebranding of “fake news” as it happens every time Trump shouts the term at somebody, it’s all part of a campaign to make us believe that facts are debatable. And they’re doing it with relatively obvious lies because that will eventually numb us against the more subtle ones. I think it’s important to not only keep holding the actual facts up against that but also to keep pointing towards the strategies behind the lies. To call it out as gaslighting and gish-galloping (thanks again to Marina for pointing towards that in a different post, as well as this one from a former administrative something-or-other. that explains the mechanics and compares them to techniques used by the greasier ‘pick-up artists’).

Me, I’ve been having a field day with “alternative this” and “alternative that” on both Sunday and Alternative Sunday (=Monday). It’s just too god to let pass. And too bad.