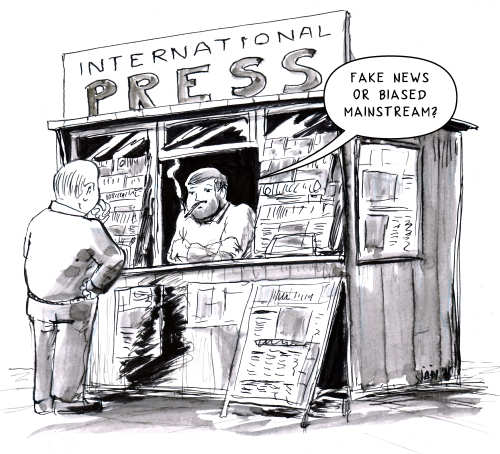 Apparently, the phenomenon of “fake news” is being called out a lot for the debacle at the US election these days. Good. I wouldn’t want those news bots to get a pass. There’s just one problem I have with that term:

It sounds like a straight English translation of “Lügenpresse” (liars’ press), the term German right wing extremists adapted from the Nazis (the original ones, I mean, from the 30’s) for what the American ones call “mainstream media bias”.

Seriously, if both sides use basically the same word for each other’s information, that’s actually a pretty good example of what’s been going wrong here, isn’t it?

I hear Facebook has announced a couple of measures against “fake news”. One of them seems to be to show posts even less in your news feed if you don’t interact with them. Of course, that’s exactly the kind of curation that got us into this filterbubbly mess.

Better to take action ourselves. Go subscribe to a variety of newspapers’ social feeds right now! Take some from the left and some from the right but make sure they’re all actual journalistic sites, with fact checking and all that. Unless you think that’s all mainstream hogwash and the real truth can only be found in Survivalist Monthly. In that case, do it all the more! You, uh, need to know what the enemy thinks!

Of course, subscribing doesn’t mean you get to see it. (Really, somebody should explain to Facebook what that word means.) You have to adjust the news feed, too. In Twitter, that’s easy and you only have to do it once if at all. Facebook is trickier. I hear you can change the feed right at the top left on your browser window where it says “news feed” from “top news” to “chronoological” or whatever it is in English – but it’ll change back with time. So what I did is, I just bookmarked the chronological view. The link for that is: https://www.facebook.com/?sk=h_chr

No, I don’t know how to fix it on your smartphone. If any reader does, feel free to share it in the comments.

You should do that anyway, by the way, if you’ve subscribed to my Facebook feeds and have been wondering why I’m not posting anything there anymore. (Or anybody’s.) I am. They’re just not showing it to you, those damn media folks.