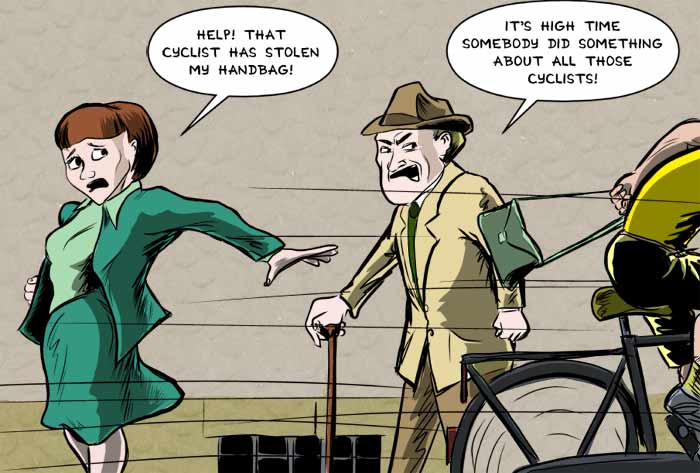 I don’t know about your area of the world, but politicians and police in Germany are certainly getting up in arms about aggressive cyclists, demanding harsher laws and more police to enforce them. Now don’t get me wrong – I’m all for riding non-aggressively and sticking to the rules of city traffic, but there’s absolutely no call for any special legislation just because some cyclists ride like idiots. And, again, don’t get me wrong, some do. That’s because a certain percentage of just about every segment of society are idiots. Except Mensa, maybe.

My favorite argument is that cyclists do get involved in a lot of accidents, and they cause a lot of them, too. That’s if you count all of them, mind you. If you only count the crashes between cars and bikes, those are just usually caused by the car drivers. Crashes between cyclists and pedestrians are a whole different thing, but that could be minimized by not making cyclists use the sidewalk everywhere because the bike roads are crappy or nonexistant and the car lanes are dangerous. Then there’s bike/bike crashes. These are actually always caused by cyclists. Which sounds like a joke, but these also feed into the statistics that claim cyclists cause most of the crashes themselves.

As a sociologist, I’m allergic against sloppy argumentations. They’re dangerous, too – once you’ve planted the idea that cyclists per se can be dangerous, people will find memories that fit the idea. Soon, it’ll be a common idea. And it won’t seem outlandish to want to do something about this totally obvious and imminent danger. By then, this cartoon won’t seem outlandish either.